Let’s Break the Ice on a BWCA November Canoe Trip!

November 18, 2022
It's been snowing all week here in Ely which points to a winter season fast approaching. In the meantime, this is one of the more challenging seasons for wilderness travel with many big lakes still open, smaller lakes starting to freeze, and trails and forests covered in fresh, wet snow. To the majority of people, I wouldn't recommend this as a time to see the BWCA, but for the select few of us crazy enough and hopefully prepared enough to bear it, this season has a rich and haunting beauty all its own. The days are shorter now so travel times are limited, and with lakes and rivers freezing at different rates routes are bound to change. The water is near freezing temperatures so a capsize has the potential for real trouble. This season requires caution and a respect of the elements sometimes forgotten in mid-summer. The lakes usually start icing up in November with some smaller ponds getting their first scab of ice as early as October some years and a few of the big, deep lakes holding out to December in others. My latest paddle in the region came December 1st with about a 200 ft ring of ice outlining Gunflint Lake. As for taking a real trip into the BWCA, here's the story of my first November overnight trip into the BW, the lessons learned, and how I came to understand how this place can be so very different from season to season.
To me, October and November are the seasons for seeing the busy places. On any given morning in July, the parking lot at the Kawishiwi River which leads into Lake One could have half a dozen groups loading and unloading or more. The lot would be full of cars and people would likely be scrambling every which way in anticipation of trips to come or in excitable reflection of adventures concluded. On this cold November morning though, we had the lot to ourselves. The only sound was the slight breeze pushing down the valley and a scab of ice ran out from the access. It took a bit of work, but we broke our way out into open water with a routine we would later become quite accustomed with as we repurposed our plastic paddle as an ice axe. We paddled down the channel past Kawishiwi Lodge which also was well into their quiet season. A place normally bustling was seemingly in hibernation. We turned the corner into Lake One and paddled out to the big part of the lake. The beauty was striking. One of the busiest entries in the Boundary Waters had regained its wilderness character for the season with a consuming quiet over the landscape as we headed towards the far shoreline. The scars from Pagami Creek fire still loom on the ridge ahead and provide a beautiful contrast this day. As we pull into the portages heading to Lake Two, we marvel again at how different things look from previous seasons. The snow on the ground and the leaves off the trees is of course part of it. But both of us were familiar with long traffic jams along this stretch of the route whenever we had guided through here before. It was special to see it now. The current through the narrows kept the portages mostly ice free and we made good time to Lake Two. We still found trail treasure on the Lake Two side of the landing, some unwanted left-behind trash from one of the summer's groups. It was fun to reminisce on campsites where we had spent nights heading through Lake Two. We had our choice of the bunch this day, but had loftier destinations in mind. Around the corner into Lake Three and we stopped at the northern island site for a snack. There was a good chop on the lake now with the wind moving sort of across our hull. It was one of those days that the canoe move up and down like a bobber, but without too much fear of capsize. 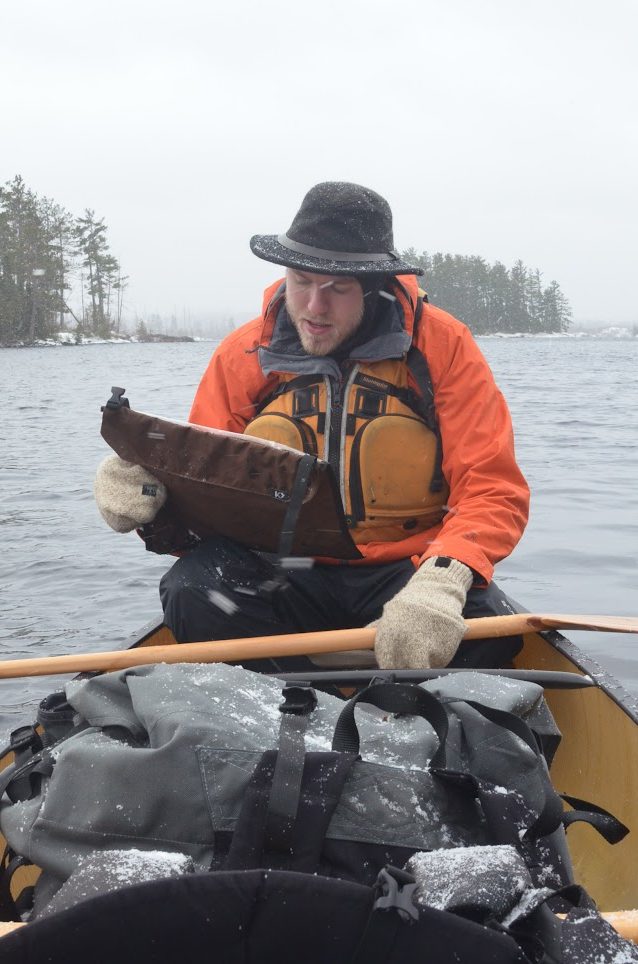 The snow begins in earnest now, but both of us are well-dressed for the occasion and the raw beauty of the snow-laden clouds descending over the ridge cast an eerie yet magical hue. From Lake Four, we turned north through the channel towards Fire Lake. The portages into Fire are lined by a wonderful rock face which mirrored into the water the image of its newly snowy demeanor. We took the portages slowly. There was some ice gathered here in the narrows and I was a tad gimpy from our trip a month prior. I also seem to have lost my watch on this stretch someplace, but beneath the rapidly solidifying water, I had little chance of recovering it. Fire Lake was well and truly locked up. It took a great deal of chopping and pulling to get ourselves back into open water. It's relatively easy to gauge the ice thickness this time of year. If the snow begins to gather on the top of the ice, a person's really in for it. If the snow isn't gathering yet, the ice may be thin enough to paddle through or at least it'll break easily. We stopped on a northern site on Fire for lunch and then it was down into Hudson where we ran into even more ice. This patch in the upper back bay was thicker and delayed us substantially. Eventually though, we were southbound out into open water. 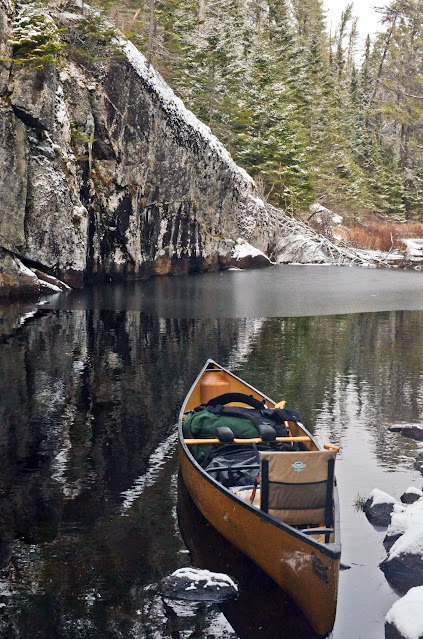 A portage between Lake Four and Fire

From Hudson, our plan was to take the creek to North Wilder. Perhaps that notion was foolish, but nature has a way of correcting the humble and chastising the proud. The mouth of the creek was frozen up as far as the eye could see. Now one would assume that swift water stays open longer and that usually holds true. The marsh widening near the mouth of this creek was neither deep enough or fast enough moving to stay open. We poked around some but quickly decided this ice was in the danger zone of too thick to break and too thin to walk. Thus our route changed. We turned back to select the best of the four rather lack-luster campsites which are clustered together near the narrows. All burned to varying degrees. We chose the second from the west as a nice spot to sleep that also was out of the wind somewhat. The sunset was approaching quickly and a warm dinner was a fitting end to a day hard-earned. 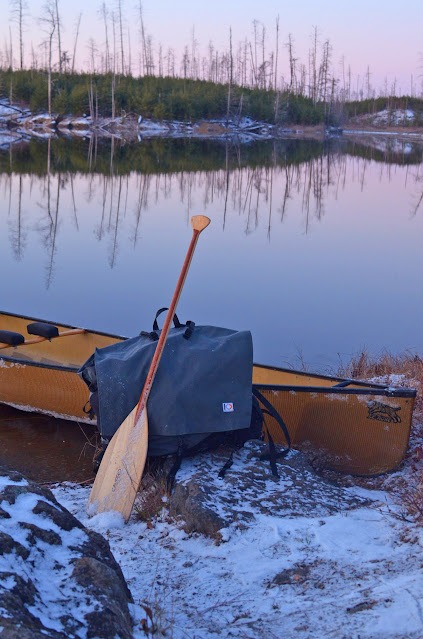 A view from the campsite

Morning dawned and the water was calm. It's a tough season to balance moisture in the tent as wet snow from outside or condensation from within are bound to complicate the evening. We got underway with the understanding that we had a little time to sightsee on our way back to the landing. It was only planned as a weekend trip, but it's good to make the most of it. The weather stayed cold enough most of the trip so that we could stay bundled. Trips earlier in the fall or with longer portages can force a routine of layering and de-layering to stay comfortable, but not so this trip. We turned down Lake Three and took a snack break at the site which sits all alone on the eastern shore. It provided a great vantage to look out over the charred landscape as we enjoyed a snack. Food often and food in quantity are keys to staying warm. Layers of course can help, but only if the furnace is still burning! We took the portage into Horseshoe. It's amazing how the topography prevented this portage from burning as Pagami Creek was marching eastward at a terrifying pace when it went through here. We noted the sign which ominously warned any who might be following the Pow Wow of how many trees lay between them and the exit. The signage which once read "welcome to hell" was gone, but because that sign once existed, we both knew this stretch of water as the "hell chain." Not the most endearing name, but as we crested the ridge into Brewis and found it totally frozen over, the irony that we had paddled through Fire and Hell and found both frozen over settled in!

Time was against us as we simply diverted south to see as much as we could in the time allotted. We spared a few minutes more to climb up the high rock ridge near the portage for lunch with a view out over Horseshoe Lake. Somewhere to our west lay Rock of Ages Lake where we would find ourselves marching through the dark nearly a year later. To our north, the numbers where we had visited numerous times on both of our guiding staff training trips together and trips with groups thereafter. And across the wild expanse of burn zone, way on the opposite end of the Pagami Creek Fire, sits the Isabella River where I have enjoyed a variety of solo ventures. Every one of those trips lie out in the unknown future this day and the cold wind rustling through the young Jack Pine sets a soothing tone to the end of a trip and the end of a season. Winter is just beyond the corner. On our way out, we find a book wrapped in a plastic bag at one of the Lake Three sites. We wonder at who left it and how different this lake looked and their trip felt compared to our own. For much of the wilderness, the campsites, the portages, and the creatures, we enter into a season of rest. 6 months from now, this place would come back alive with groups of adventurers looking for their summer excursions. But for now, we relish the quiet and a chance to see this special place in a special season when so few other people get to. 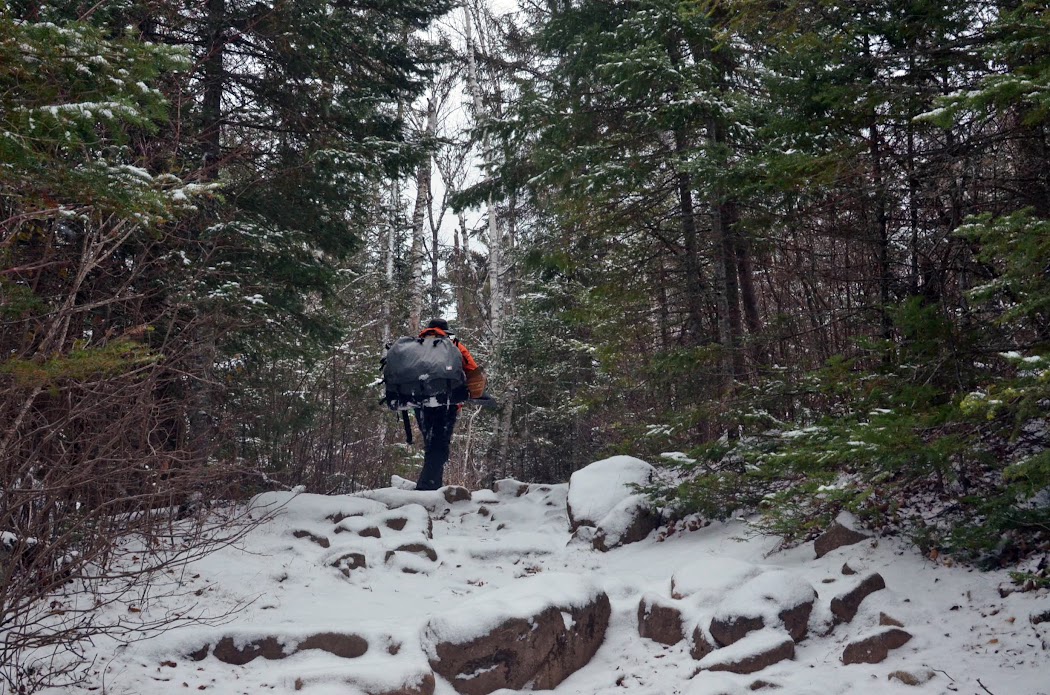 Portaging between Lakes One and Two